We have reviewed some of the top-rated Catfishing reels out there on the market to find you the Best Spinning Reel for Catfish. If you are in a hurry:

Penn Spinfisher VI is the Best Catfish Spinning Reel as per our reviews.

Now, let us move on to our in-depth reviews.

Here is our list of the 5 Best Catfish Spinning Reels: 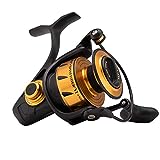 Since my pockets are a little tight after the holidays, I decided to branch out and start researching less expensive brands of Catfish spinning reels. Low and behold, I end at the Penn brand. I am surprised to realize that Penn has many of the same features as Shimano and the price tag is much lower!

It is strong and sturdy in rough waters. The gears are sealed so it is water and corrosion resistant. It isn’t heavy and it’s easy to cast. Rings show the line capacity, which is a very cool feature. The drag washers are made of carbon fiber and the drag of 20lbs is smooth!  With the gear ratio of 6.2:1, it is built to bring in the big guys!

The Penn Clash has the classic Penn color scheme: painted black with gold accents. Penn has created a wonderful design that is highly functional while remaining attractive.

Penn Spinfisher VI is one of the best catfishing spinning reels for the money. You get a well-known brand for a reasonable price. It is strong and sturdy and made to last. It is a high quality spinning reel that performs well for anglers of any skill level. 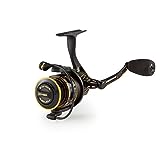 Penn Class comes with the Wave spring drag system to give you a more linear drag curve. This allows for precision. You only use as much drag as is necessary and can adjust the drag on the fly with confidence. This mechanical advantage will give you an edge while Catfishing. Especially if you are fighting a big catfish or if you are an inexperienced angler.

You can let the HT-100 Drag system wear down the fish. Their runs will become successively shorter and less violent. Or you can stop a fish that is running for cover by turning up the drag. All of this means that Penn Clash is a great option for fast running catfish.

Penn Clash has line marker rings marked at one third and two thirds capacity. These are useful for two reasons. First, it makes spooling the line much easier. You’ll know how much line you need to add at a glance. Secondly, you will eventually find yourself fighting a big catfish and need to know how much line you have before the fish spools you. You could take your eyes off the line. But wait too long while trying to guess and you’ll lose the fish.

Now you can take a quick look at the line capacity rings and see if you are under a third or not. And as you reel in the fish, you’ll also be able to estimate how close you are to pulling it in. Overall, Penn Clash is one of the best catfish spinning reels to catch big fish.

The Pflueger President 30X has a good balance to it and works well with six-foot rods. When the reel line was relaunched, Pflueger was able to reduce the weight of this model by approximately 10%. The new version of the 30X model weighs 8.8oz. This makes it a solid choice for new anglers who want to fish all day without hurting their back.

The drag is a bit slower than other reels at the same price point. This allows you to catch a larger Catfish on a smaller line once you have developed the necessary skill. This means the Pflueger President reel will grow with you as you enhance your skills as an angler.

You’ll also put less strain on your wrist and forearm when fishing with a lighter reel. To help with arm fatigue, Pflueger has also designed a soft, ergonomic knob that grips well when wet. This will help you avoid potential hand cramps if you hold your knob for too long in one position.

Pflueger has crafted a heavy-duty solid aluminum bail wire for the President series. This bail wire is less prone to warping than competing products in the same price range. The reel is encased in a graphite body and also comes with an aluminum handle.

The graphite body is excellent at protecting your reel from everyday wear and tear. Do you tend to let your reels bang around in the back of your truck or in pole holders? This is the reel for you. Pflueger President is able to take a lot of damage. There is a definite feeling of quality here that is not always present in reels even 3X-5X the price. It is a refreshing change of pace.

The Penn Spinfisher V 4500 is the fifth generation of the renowned Spinfisher product line. It was created with harsh saltwater conditions in mind so that it will last for several years, even under rough conditions. You can be sure that it is strong and durable, with an exceptionally smooth drag.

It has a fifty-pound braid capacity or up to twenty pounds of monofilament. It has five stainless-steel ball bearings to keep it cranking smoothly, and there is another one in the anti-reverse mechanism. There is no need to use a backing when you are using the Superline spool on the Spinfisher, even when you are using braid.

When you buy a Penn Spinfisher, it will come pre-assembled and ready to go! There will also be some instruction manuals, parts descriptions, and fishing tips inside the box. Another small, but important part is the extra washers that come with it. They are important parts for adjusting your drag system, so you don’t want to lose them!

I want my reels to last for more than a few catfishing seasons, so it has to be built to last. Both the body and the side plate on the Spinfisher is durable metal, instead of graphite. It is also treated to protect it from corrosion, even in saltwater. And there is a sealant that is placed strategically throughout so that water never gets inside the most important parts.

Another nice feature of the Penn Spinfisher is the incredible drag system. It is under the spool, so it gets even more protection. They also added extra HT-100 washers to make it the most powerful drag system yet. Different drag settings are available for a variety of bait techniques, including Live-Line models that allow for free-spool to use for live-bait. 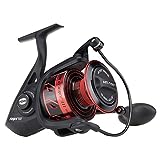 One of my favorite Catfish reels is the Penn Fierce III 8000 series. It fits perfectly with my 11-foot Ugly Stik surf rod. That is a relief because I was a little worried about the weight of this reel because it weighs in on the heavier side, but it doesn’t feel heavy.

Let’s talk about specs. It’s rated for a monofilament line 20/25/30lb or braided line 50/65/80lb. I use it with a 65lb braided line, and it works great. It has an aluminum bail and super line spool makes it easy to maneuver. The carbon fiber drag system has four stainless steel ball bearings and a reverse bearing. The drag is smooth. The cast and retrieve are made with ease and it performs the best out of all my Penn reels. The gear ratio is 5.3:1 and the max drag on this thing is 30 lbs.

It’s pretty much the same reel as the Penn Fierce II BUT the drag is unlimited! This is so great when out and need that drag to pull in the big guys out in the saltwater! It’s well made and ready for saltwater fishing because it withstands the elements and it is corrosion resistant. I have not had any problems. I keep it clean but I’m not always on top of it every time after coming in but as I said, no problems so far.

Penn has outstanding customer service that is available through the phone or a link on their webpage. All Penn reels come with a one-year warranty, as long as poor maintenance doesn’t cause the issue. Just be sure that you register your product when it first arrives because that will make the warranty process go smoothly.

To recap, here is our list of the 5 Best Spinning Reels for Catfish:

If you are looking for the Best Spinning Reel for Catfish, you can pick Penn Spinfisher VI or Penn Clash. Penn Spinfisher VI is strong, durable, and powerful. It is perfect for a variety of fishing methods, including deep crankbait. It has been coated with an anti-corrosion technique and sealed to make sure that no water is able to get inside.

If you don’t wish to buy one of the Penn catfish reels, then you can go for Pflueger President 30X. You will have a highly durable reel, thanks to the encased graphite body. The lightweight of the reel and ergonomic soft knob provide comfort during long hours on the water. It’s no wonder this has been a popular reel for years.

Make sure to pair Pflueger President 30X with a good quality rod. Then you’ll have a tremendous setup that will be a great all-around Catfishing reel. It’s so smooth, in fact, that it’s hard to believe the President line is a budget series. You’ll find it easy to catch and reel in Catfish with the 30X.

We hope you liked our pick of Best Spinning Reel for Catfish. Don’t forget to share your experiences with us via the comments sections!


Hey, I am Victor Mays and I have been hunting and fishing for over 20 years now!